Reconnecting with his brothers from the 2009 TransAmerica Journey of Hope Team, Whitey Holt, Delta Delta (Truman State), recalled his memories with The Ability Experience and Pi Kappa Phi, and reconnected with the men he served with a decade earlier.

“We picked up exactly where we left off at arrival, only 10 years later,” Holt said. “You will make lifelong friends and memories.”

Holt, a two-time Pi Alpha, continues to make a monthly donation to The Ability Experience as a member of the 77 Society, and said he is proud to continue to support the opportunities he had for the next generation of Pi Kappa Phi members.

“We all want The Ability Experience to continue to grow and provide new Pi Kapps with the same the wonderful experiences we’ve had,” Holt said. “Making philanthropy a priority in your budget by contributing to The Ability Experience on a monthly or annual basis is the best way to allow for the continued success of the organization.  The 77 Society, I find, is the most convenient way to accomplish this goal by making a monthly donation.”

Holt’s personal Ability Experience began in his chapter at Truman State, where his brothers convinced him to sign up for Build America in 2006 after Holt saw the impact the older brothers had made the year before. 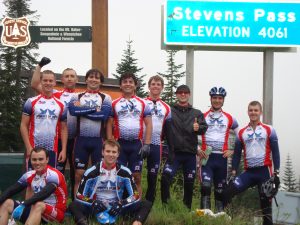 “What sealed the deal was an attending a PUSH Camp in Illinois, Camp Little Giant, my freshman year,” Holt said. “There I met Tanner Bacon and other great members of the national staff and was introduced to the mission of Push America in more detail.  Following the Push Camp two of my best buddies, Andrew Green and Andrew Greiner, signed up for Build America and convinced me to join. The rest, as they say, is history.”

Build America would then take Holt to Wonderland Camp in Lake of the Ozarks, Missouri, where he received another opportunity to continue to serve people with disabilities.

“The staff, campers and facilities were really wonderful, and I ended up working there as a camp counselor the following summer,” Holt said. “The camp director at the time, Marcella Trujillo, was extremely dedicated to making every campers’ experience special.

Because of the support of The Ability Experience’s donors, Holt able to provide labor these projects and developed his leadership skills by completing service projects at Camp Little Giant and at the local ARC his chapter partnered with, while also deepening the relationships he shared with his brothers.

“There’s a lot I loved about every Ability Experience event, but (the ARC) event was particularly meaningful because of the lar 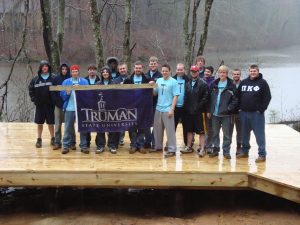 ge participation it would bring from my chapter peers and because it was connected with the local community my college was set in,” Holt said.

In his current role as an investment advisor and as a father of two, Holt said that the skills he developed through his participation in The Ability Experience’s events were crucial to the success he has found more than a decade after cycling for the Journey of Hope.

“My work involves a lot of small-talk,” Holt said, “the range of my experiences that came from Build America and Journey of Hope certainly gives me a lot more to talk about in those kinds of situations.”

Holt also said that these skills have been further developed as a Pi Alpha, which has introduced him to new people through events he’s attended as an alumnus.

Holt offered two pieces of advice for those looking to make an impact through The Ability Experience as a Pi Alpha: never turn down an ability experience event, and be willing to help students have the opportunity to have an Ability Experience by investing in its programs.

“The Ability Experience has been a tremendous steward of the money they have raised and the volunteer man-hours they have organized,” Holt said. “We want this organization to have the financial means to explore new opportunities and sustain what they already have.  Who knows when another great idea will come around that will lead to the next big Ability Experience event?”