Waking up early to leave a very gracious host in Gigi’s Playhouse and we see that the day off the bike in Tampa was very worth it because even though the wake up was again around six o’clock in the morning. The ride was not quite the most usual ride ever because it was going through a lot of towns and populated areas instead of areas that are more in the woods and not as populated. The miles were not the hardest miles the team has ever done but the visit was something else entirely. We were greeted by the Webster Memorial Baptist Church with people pouring out the seems to see us and show us all of the hard work that went into having us visit. They first off woke up at five o’clock in the morning and starting preparing a full spread of food for us that was absolutely incredible. They had all of the home food that any of us could have ever wanted while being on the road and for some a lot way away from home. People on the team had to watch themselves before they were put into a food coma especially with arm wrestling going on next. With many of the residence at the church lining up to arm wrestle the next team member the smiles on everybody’s face grew bigger and bigger.

With a little bit left in the ride the guys costed into the Sunrise Community of Polk facility where we were given food from Traci Hughes who has been helping out the team for a few years now. And with the lunch we had most people would say they were pretty full but when the barbecue pulled pork can around the corner everybody was somehow hungry again. This was one of the earlier nights that the team overall was done with everything and they were able to do what they wanted to do and just hangout and get to know each other even more. 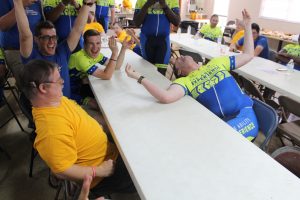