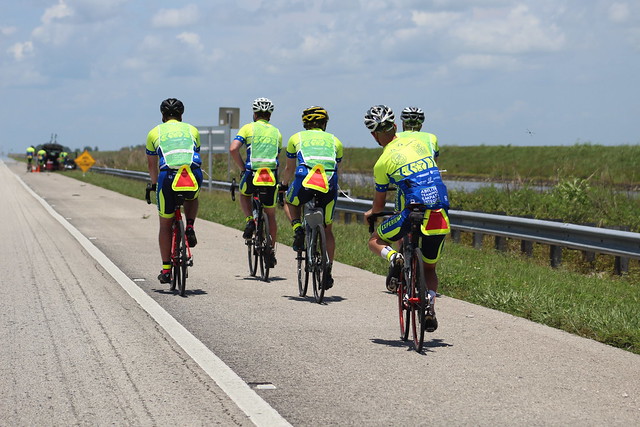 After an amazing Orientation at Florida International University, the team started the day with a 6am wake up and a sponsored breakfast by Pi Alpha, Philip Hamilton. Having been a member of four Gear Up Florida teams, I have been impressed thus far with the team’s ‘one team, one mission’ mentality. We quickly packed the vans, and began our morning circle up, where we dedicated our rides to each of our mother’s in celebration for Mother’s Day.  The team also chose to write the names of each of our mother’s on our arms to honor them and to provide each of us inspiration for the 93 mile journey from Miami to Clewiston. We began  our day with the weather on our side, with sunshine, temps in the low 80’s and a ‘cyclist friendly’ tail wind, which allowed the team to get out to a fast start!  As the day progressed the team made sure to break up the time singing, and then dancing at crew stops, reflecting on the overall positive nature of the team. Lunch was sponsored by two time Pi Alpha and a former team mate of mine, Andrew Denucci (Go Rockets!) which we enjoyed tremendously.  Shortly after lunch the temperature became warmer as temperatures rose above 90 degrees, and the hot Florida sun rose overhead coupled with a headwind.  Despite these conditions, the team maintained a positive attitude and persevered through the elements to all safely arrive in Clewiston, with a shared sense of accomplishment.  As each paceline finished the day, they took the time to wait outside of sponsored lodging (Clewiston H.S.) to cheer on each of the pacelines as they finished their rides.  I continued to be amazed by the one team, one mission mantra, and I look forward to many more great moments like this one.