In Orlando for the second day we all needed some rest and luckily we were given a chance to stay at the Rose Inn International by Paula Usrey. The day overall started slow because we were not on a time crunch to get on the road and cycle at about 6 or 7 in the morning. With breakfast being very relaxed and more along the lines of when and what you wanted to eat on you people were able to do any bike maintenance, crew duties, and above all just hangout in a beautiful city. The first bit of programming was started when Daybreak at Easter Seals Florida had us over for some games like mini golf, fishbowl, and other classic carnival games.

The residence was so incredibly delighted to see us and just spend time with them that the whole team lost track of time and overall what we were doing as a group. And were also able to have a great amount of fun grilling out and eating hotdogs and stuff provided by Jose Santana who made the event very welcoming and fun for both the residents that use the services during the day and the team. When we left that place it was all business on making sure everybody’s bikes could make it rest of the way and to get ready for an amazing meal that was sponsored by the Jones family at the restaurant Kobe Japanese Steakhouse. Where we were able to have some of the best food some people on the team had ever had and to talk to some amazing alumni that had done GUF in the past. It was an assortment of laughs and stuffing out faces with whatever the chief wanted to throw at us. We all went back to the hotel very full and happy to the fact that we were able to spend even more time off the road with each other and we all got geared up for the next ride into Ocala 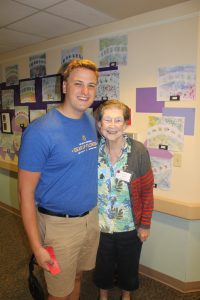