This morning, we woke up ready to ride from Ocala to Gainesville. The ride wasn’t too difficult as we have become used to the heat and humidity at this point. Starting early always helps with the temperature, and we were able to hit the road just as the sun was rising. The route today had a few hills which we have not encountered a lot of, and that was an interesting challenge for some of the team. Similarly to previous rides though, we all had each other’s backs, and motivated each other the entire way. We had a stage up at Santa Fe college, and what happened next is difficult to describe. We had a police escort just down the road to the ARC of Alachua County, and the arrival was one that none of us will ever forget. There must have been over a hundred people lining both sides of the driveway of The ARC, and they were playing music, cheering, and dancing, and it was all for us. One of the most amazing things was that each of them had made an autograph book, and as we cyclists lined up, we all signed each of their books before they clutched them with pride and entered the dining halls. The food was amazing, and after we finished, the dining hall turned into a huge dance party. The smiles on the faces of the participants, and our team, were bigger than I had ever seen before.

One of the things that we talk about on this trip is that no matter how much we give to this organization, it seems to give back to us participants tenfold. Many people will never know what it feels like to have a group of people look up to them and be so happy just to have someone to dance with. It truly touches one’s heart to see the joy that we can bring these people, and I learn more about myself than I can describe in these pages every friendship visit. This friendship visit was the purest example of what it is to be a Pi Alpha, someone that sees people for who they are, and does not judge them based on appearances and ability level.

These participants look forward to the arrival at the ARC of Alachua County every year, and everyone that gets to be a part of it is impacted at their core by the energy at that arrival.

Finally, after dancing, laughing, and lots of pictures, we departed for showers and lodging at Trinity United Methodist church, and enjoyed a full taco bar for dinner. We even had some cheesecake – courtesy of our crew chief and a few teammates. Overall, it was an amazing day, and it gave me and the team the energy we needed to fuel our push to Jacksonville tomorrow. 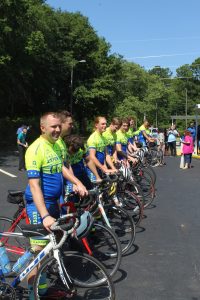